We are happy to announce that this year’s play will be The Vicar of Dibley, a stage play by Ian Gower and Paul Carpenter!

Performances will be 18th to 21st May at Alton Assembly Rooms. 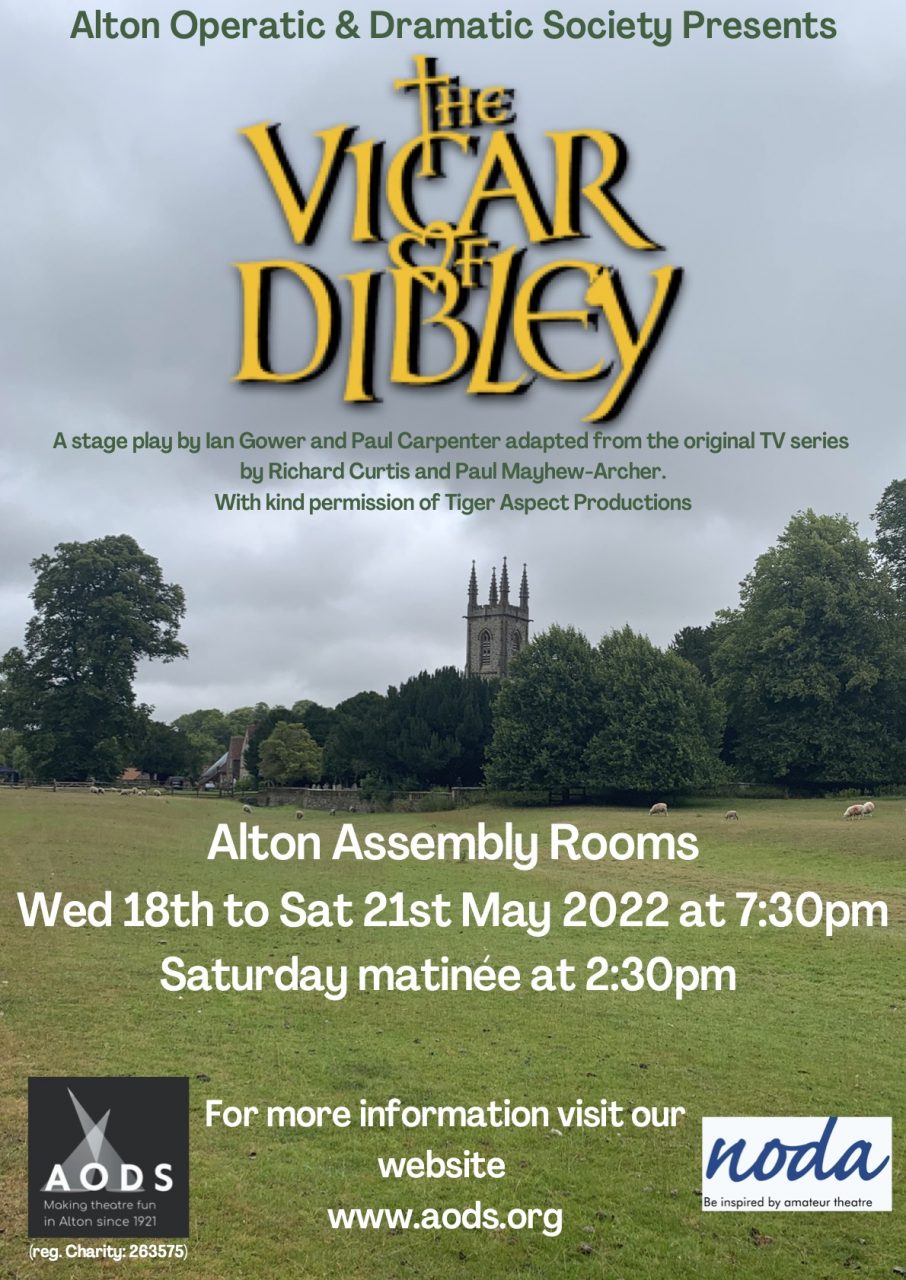 The Vicar of Dibley: this play by Ian Gower and Paul Carpenter is based on the original popular television series by Richard Curtis and Paul Mayhew-Archer. It features Geraldine Granger as the first female vicar in at traditional village parish.  From her arrival in the village and first parish council meeting, to the finale of  the wedding of her verger, Alice Tinker to Hugo Horton, the son of the chairman of the parish council,  this play had the audience laughing all the way to the final curtain call.

The programme was well designed and very easy to read, with comprehensive biographies and “action” shots.  NODA details were featured, together with some interesting information about the formation of NODA in 1899.

The stage was split into two “rooms” – one in the parish hall and the other in the vicarage;  with the lighting focus alternating between the two rooms for each change of scene.  The vicar’s sitting room was comfortably “furnished”, complete with a picture of Kylie Minogue; and the parish hall looked only too familiar!  Switching the lighting from one room to the other made a very effective scene change; with popular music of the period providing a link between each scene.  Both costumes and make-up recreated the well-loved characters from the original series, with some quick changes required.  Alice’s costume for the final wedding scene deserves special mention, as well as her unusual bridesmaid!   With the stage split into two rooms, the action moved quickly between the parish hall and the vicarage, which must have required some speedy backstage manoeuvres for several of the actors.

The play was ably directed by Miles Eden, assisted by Pippa Mills, in his first production for A.O.D.S., with the actors all giving their interpretation of the well know characters.  The parish council meetings chaired by a pompous David Horton (Piers Husband) were a delight; with each actor obviously relishing the eccentricities of his or her character. From dithering Hugo Horton (Paul Gray) with his penchant for colourful ties, Owen Newitt  (Will Nash) lusting after the new vicar, Jim Trott  (Darren White) answering every question with …. “no, no, no, yes”, to Frank Pickle (Peter Chiverton)  the pernickety Parish Clerk and Letitia Cropley (Kate Youll) with her colourful knitting and outlandish recipes.  In the vicarage,  Geraldine Granger (Sophie Borrell) was getting to know her verger, a very ditsy Alice Tinker (Lizzy Hurley).  The interplay between these two characters  was excellent, even down to the “knock, knock” jokes.  The final scene of the wedding of Alice and Hugo was very effective; using the main body of the hall, with the audience as part of the congregation; including a “guest” who had turned up at the wrong wedding!

Altogether a very entertaining evening with a receptive audience who thoroughly enjoyed the performance.