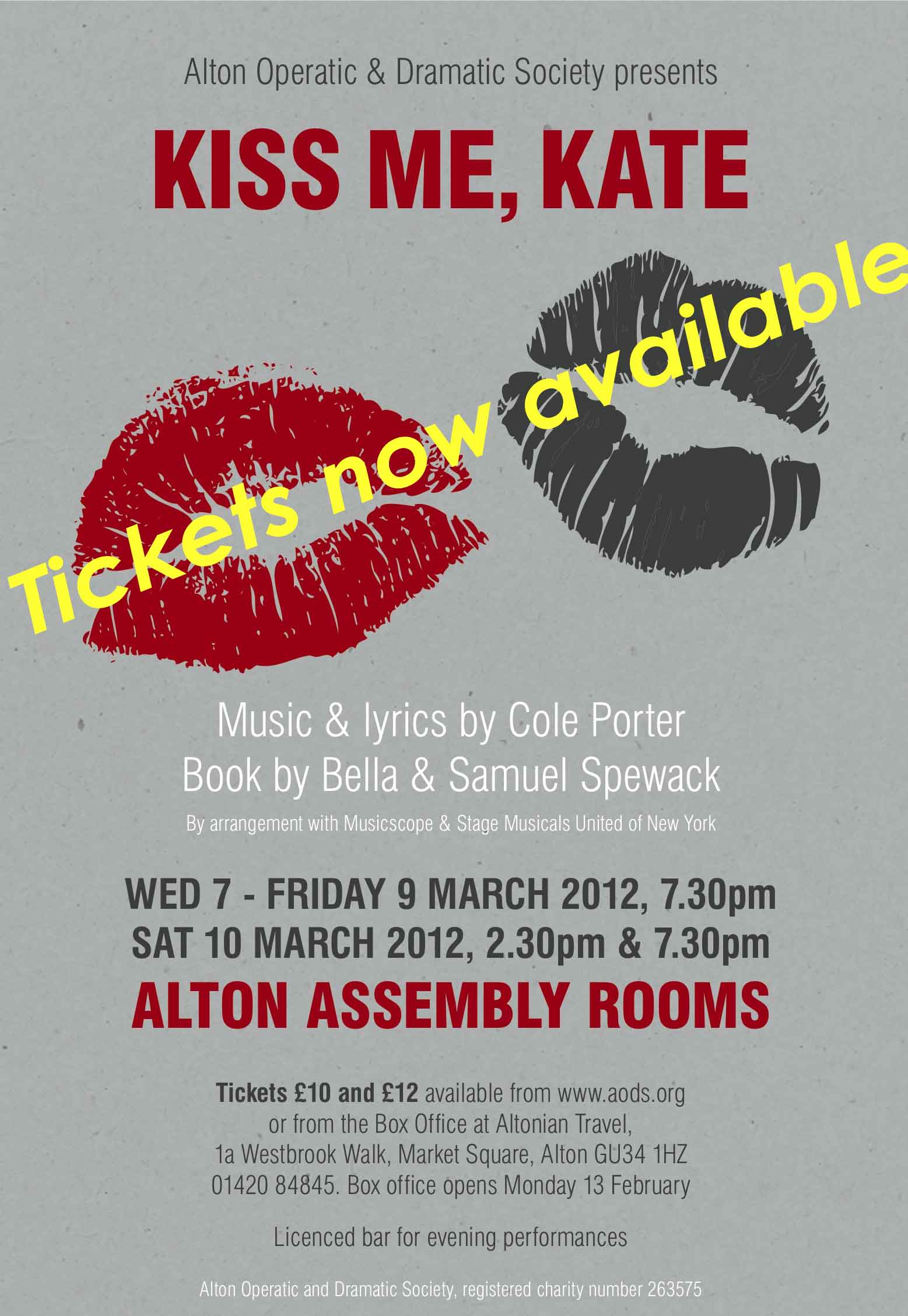 Synopsis of the show

KISS ME, KATE (Book is by Bella & Samuel Spewack and is being produced by arrangement with MusicScope and Stage Musicals Limited of New York.) was originally produced in 1948 and has been considered one of Broadway’s treasures.

Another Op’nin’ Another Show welcomes you to Baltimore and to the opening of a musical version of Shakespeare’s “The Taming of the Shrew.” A play-within-a-play unfolds, where each of the four main cast members’ on-stage performance is complicated by what is happening in his off-stage life. Fred takes the roles of director and male lead, Petruchio. His ex-wife Lilli, now a movie star with a reputation for being difficult to work with, plays Katharine, the shrew. Fred’s current love interest, Lois, plays the role of Bianca, and the other man in Lois’ life, Bill, plays the role of Lucentio.

Before long we find out that Bill has a gambling problem. He tells Lois that he signed a $10,000 IOU for a debt in Fred’s name, instead of using his own name. Not long after Lois begs Bill to stop gambling, two thugs show up at the theater to make it clear that Bill will have to make good on that IOU. But they confront Fred instead of Bill, since Fred’s name is on the gambling debt. Lois asks Bill Why Can’t You Behave? Fred and Lilli reminisce nostalgically about their other performances together, and their warm feelings for each other return -Wunderbar. When flowers sent by Fred to Lois mistakenly get delivered to Lilli, Lilli falls even more deeply in love with Fred -So in Love.

We are brought into Shakespeare’s world with We Open in Venice. We are told that Lucentio (Bill) may not marry his love Bianca (Lois), until Bianca’s older sister Katharine (Lilli) the shrew is married off. Bianca enjoys flirting in Tom, Dick or Harry. Fortunately for Bianca and Lucentio, Petruchio (Fred) comes to town looking for a wealthy wife and is not scared off by Katharine. Petruchio explains his goal in I’ve Come to Wive It Wealthily in Padua and Katharine makes her feelings clear in I Hate Men. Lilli finally discovers that the flowers Fred sent her were actually intended for Lois, and we hear her shriek in outrage from offstage. In Were Thine That Special Face Petruchio sings of his strong feelings for Katharine. Lilli threatens to walk out of the show, but is forced to stay. Fred convinces the two gangsters that he will be able to pay them the money he allegedly owes them, if they can make sure Lilli continues to play her role. The gangsters put on costumes and become part of the cast of “The Shrew” to stay close to Lilli. Lilli uses her anger toward Fred to express herself as Katharine for the rest of the show. Fred is forced to get tough with Katharine as he plays Petruchio. Kiss Me, Kate closes the first act.

The second act opens with Too Darn Hot, which gives the cast a chance to relax outside the theatre during intermission. Back at “The Shrew” Petruchio marries Katharine, and already misses his relatively peaceful single life in Where Is the Life That Late I Led? Lois and Bill sing of their relationship in Always True to You (In My Fashion) and then Bill sings Bianca. When the gangsters call their boss to ‘check in,’ they find out that the boss has been killed. This makes Bill’s IOU worthless, so the gangsters can leave. Lilli takes the opportunity to walk off the show, and leaves with her dependable fiance Harrison, as Fred reprises So in Love. The gangsters get caught up in the limelight and pay an unusual tribute to Shakespeare in Brush Up Your Shakespeare. Bianca and Lucentio are finally married. As “The Taming of the Shrew” comes to a close, Lilli unexpectedly returns to the stage, and in Katharine’s words expresses her intention of returning to Fred -I Am Ashamed That Women Are So Simple. Lilli and Fred are reunited, and Lois and Bill are together.