Hailed by critics and audiences alike for its heart and its wit, My Fair Lady is a beautiful musical about transformation, patronage, gender politics and class, based on George Bernard Shaw’s play, Pygmalion. Acclaimed Professor and confirmed bachelor Henry Higgins makes a wager with his linguistic colleague Colonel Pickering that in six months he can pass off “gutter snipe” Eliza Doolittle as a duchess at an embassy ball. Through arduous training, day and night, Eliza learns how to speak English “properly,” and transforms into a lady respected and adored by all classes. Along the way she bewitches young Freddy Eynsford-Hill into falling in love with her, and convinces a supposed linguistics expert that she is royalty.

Through her transformation process, Eliza forges a deep connection with Colonel Pickering and most especially with Professor Higgins. However, she finds herself in a difficult position, now too refined to go back to her old life and not with any means or desire to live life as a lady of leisure – especially by herself. When Higgins completely fails to acknowledge Eliza’s role in her own transformation, she leaves his home. It is only then that Higgins realizes that he cares deeply for Eliza. The play ends with Eliza’s return to Higgins’ home, and the ending is left ambiguous, yet it is beloved for being both one of the cleverest and one of the most romantic plays of all time. 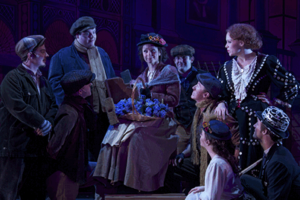 The book and lyrics so cleverly written by Alan Jay Lerner weave in amongst the brilliant and very well known music of Frederic Loewe. “Wouldn’t it be Loverly?”, “I’m Getting Married in the morning”, “The Rain in Spain” and “I Could Have Danced All Night” are all so well known that even non-singers join in.

You can now download the latest rehearsal schedule and rehearsal blocks:

The Team for My Fair Lady

Following the auditions , and after lengthy discussion, the casting committee are pleased to announce the cast list for “My Fair Lady” is as follows: