Skip to content
Having had a very quiet 2020 through the interference of the Covid-19 pandemic, we are able to announce our plans for 2021.  We have missed seeing all of our friends and look forward to gathering again, even if socially distanced.
We are celebrating our centenary in 2021 with a production of “A Midsummer Night’s Dream” by William Shakespeare.  This play has now been cast, but if you are interested in joining in backstage, front of house or in any other way please contact us. 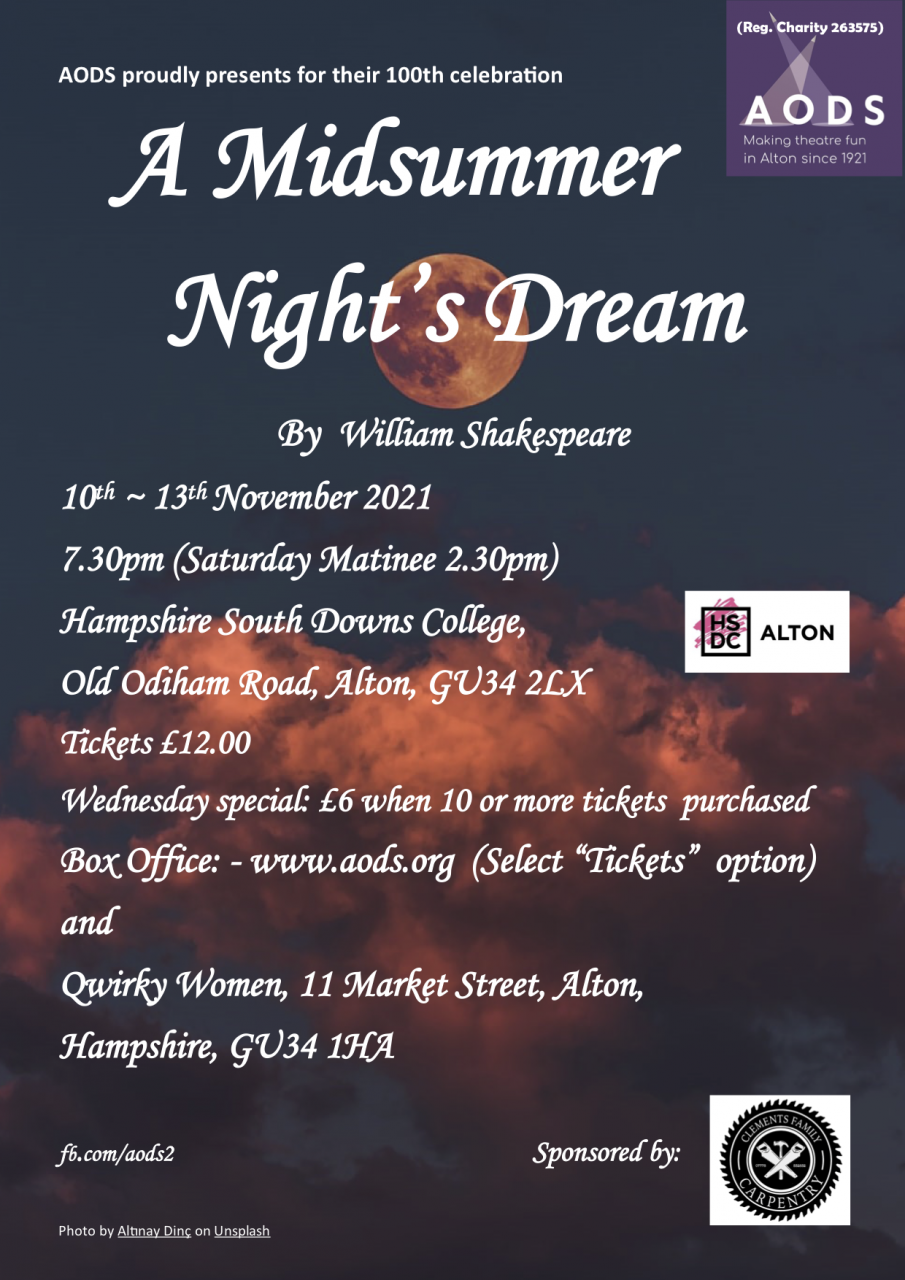 In “A Midsummer Night’s Dream”, residents of Athens mix with Fairies from a local forest, with comic results.  In the city, Theseus, Duke of Athens is to marry Hippolyta, queen of the amazons.  Bottom the weaver and his friends rehearse in the woods a play they hope to stage for the wedding celebrations.

All four young people end up in the woods, where Robin Goodfellow, a Puck, who serves the fairy King Oberon, puts flower juice on the eyes of Lysander and then Demetrius, unintentionally causing both of them to fall in love with Helena.  Oberon, who is quarrelling with his wife, Titania, uses the flower juice on her eyes.  She falls in love with Bottom, who now, thanks to Robin Goodfellow, wears an ass’s head.

To resolve the mistakes made, while the young lovers sleep, Robin Goodfellow restores Lysander’s love for Hermia, so that now each young woman is matched with the man she loves.  Oberon disenchants Titania and removes Bottom’s ass’s head.

The two young couples join Theseus and Hippolyta in getting married and Bottom rejoins his friends to perform the play.

We will be making further announcements throughout the next few months so please keep checking in at the website, on Facebook

What better way to kick-start a society after the last eighteen months than a piece by the immortal Bard? A Midsummer Night’s Dream is rather out of the usual run of plays and musicals that AODS perform but it seemed to fit the bill perfectly – not too serious and open to the refreshing modern interpretation that Director Alison Crow has given it.

The delightful studio theatre of Alton College was the perfect venue for this very minimalist production: no scenery at all, just a black set with some rostra, to give variations in height, and very few props. Costumes were well chosen – modern everyday dress for the mortals and beautiful butterfly-like wings for the fairies. So, it was down to the well-designed lighting and the cast to create the magic, which they did with gusto.

Space doesn’t allow me to compliment everyone individually, but you all interpreted your characters well and put across the dialogue in a way that was easy to understand, making this a very accessible production of Shakespeare’s work. Stand out for me were Brian Arrowsmith as Bottom – superb characterisation – and Kate Youll as Flute – a joy to watch during the play in Theseus’s Palace!

I must also congratulate the maker(s) of the ass’s head – beautifully done. More a piece of art than a prop. There were some nice directorial touches too – the use of the mobile phone as the oracle, the hand sanitiser and the bushes in the forest. Little touches like these can really lift a show.

A few stumbles with dialogue can be forgiven – Shakespeare’s words can’t be paraphrased or made up on the fly, but we maybe heard the (excellent) prompt a little too often. Otherwise, the play had good pace and flowed nicely between the scenes.

The programme was of good quality (nice to see a page devoted to NODA), giving a good synopsis of the plot. I particularly enjoyed reading the biographies of the cast – so much more interesting and amusing than the cold CVs you get in professional programmes.

Having slept through part of a production of The Merchant of Venice with Sir Alec Guinness as Shylock, I tend to be a bit wary of Shakespeare. No need to fear this production however, you put it across so well that I was on the edge of my seat and understood everything that was going on. A huge WELL DONE to everyone involved.