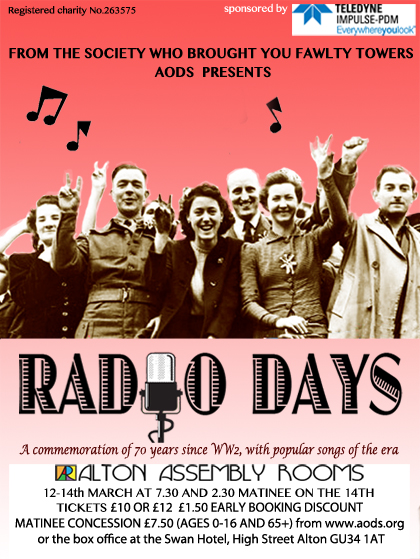 AODS (Alton Operatic and Dramatic Society) is proud to announce its next performance. Flushed by the roaring success of Fawlty Towers last Autumn, AODS have turned their varied and impressive skills to an original World War II time theatrical and musical revue, a commemoration of 70 years since the decisive final stages of that epic conflict, with popular songs from the era, set in a Radio Station somewhere in deepest darkest Home Counties.

Radio Days is set during WWII and follows a group of people working in a radio station during the war, losing friends and loved ones who receive their call up papers, the departures and arrivals of letters and the emotion of the continual goodbyes or the arrival of a dreaded telegram. We hope to evoke the atmosphere of the period 1939 to 1945 through songs, play excerpts and monologues. This specially created show uses a variety of songs from the period toe create laughter, sadness and acknowledges the lives of those who were on the home front.

Buy tickets online from TicketSource or see our Tickets page for details of the box office. 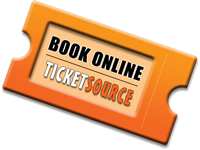 You can find out about the cast and rehearsals on the Cast Info page for this production.

Radio Days, conceived, written and directed by Alison Crow and Eleanor Bradbury, takes us through the lives of the Radio Station’s  staff complement, from the outbreak of war and the departure of the British Expeditionary Force in 1939, right through to the Americans’ eventual overcoming of the Japanese fleet in 1945.

Throughout the trials and tribulations of call up, keeping in touch with their loved ones, separation during the evacuations, wartime romance, bitter loss and general deprivation, our doubty staff team manage to maintain good old British Stiff Upper Lip, whilst preserving contact with their listening public through announcements, stirring renditions of all the favourites from that Oh-so-nostalgic wartime song repertoire, as well as performing live stage radio productions of the period, including excerpts from Arnold Ridley’s Ghost Train, and Noel Coward’s Private Lives.

And in their ‘off time’ they share their prejudices, their frailties, and their human spirit around the hub of the Radio Station premises – the tea canteen table.

This is a rowsing performance, bittersweet with the tenderest moments counterpointed by the best and most nostalgic singalong numbers. The cast features a number of stalwart AODS regular mainstream performers, coupled with a really nice sprinkling of young and older newcomers to our company.

The Musical Director will be Chris Gardner.